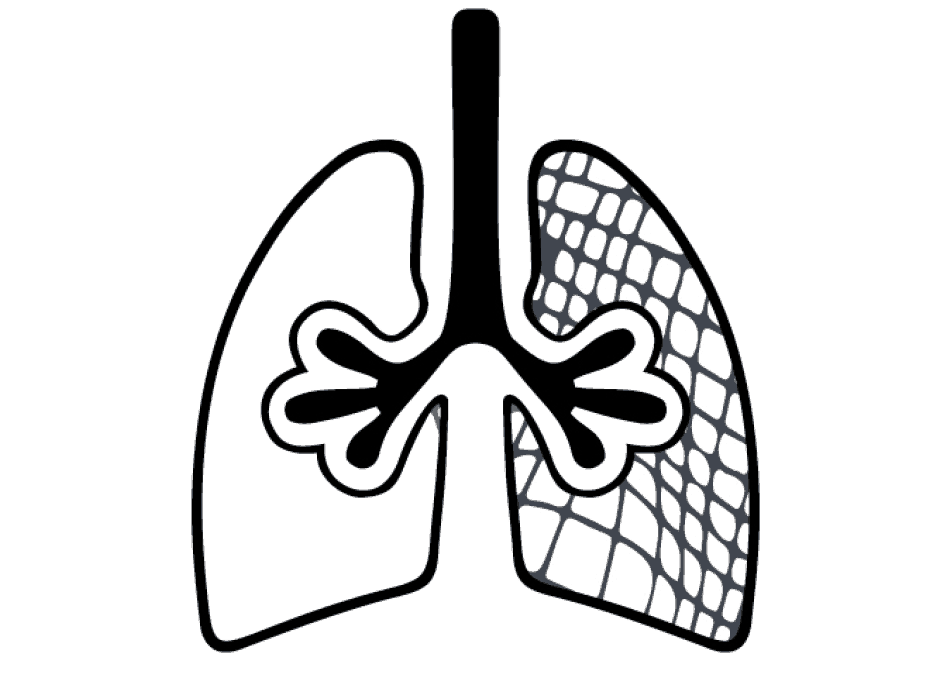 COPD (Chronic Obstructive Pulmonary Disease) is a disease state characterized by significant airflow limitation and lung tissue destruction. The main cause of COPD is exposure to cigarette smoke and environmental pollutants, such as fumes and fine particulate matter. Airflow limitation is one of the main pulmonary manifestations, caused by inflammation, loss of lung elasticity, lung tissue destruction and narrowing of the small airways. There are currently very few therapeutic treatments specific for COPD.

The two most common phenotypes of the disease are emphysema (parenchymal destruction) and chronic bronchitis (small-airway obstruction). The pathogenesis of emphysema and chronic bronchitis is very complex, with changes being controlled by susceptibility factors such as environmental exposures and host genetics. Animal models are key to advancing our knowledge and understanding of the pathogenesis of COPD in humans. To help develop new treatments, these animal models need to present clinical and pathologic features of the disease observed in humans.

Given COPD is an inherently heterogenous disease, a variety of animal models are utilized by researchers. Each model has its own advantages and limitations, helping elucidate different factors and pathways implicated in disease pathogenesis and progression. Further, as the natural course of disease progression in human can take years, animal models are essential; since disease induction, mimicking human pathogenesis, can be achieved in a much shorter timespan.

There are two well-established and widely used animal models of COPD: the elastase model and the cigarette-smoke (CS) exposure model. These are well established models and have provided key insights into the major mechanistic causes of COPD, including inflammation, oxidative stress, protease/antiprotease in-balance, alveolar cell apoptosis, early senescence and autophagy.

One of the two most common models of COPD is the elastase-induced emphysema model. The elastase model originated from the clinical observation that alpha-1 antitrypsin deficient patients present with an early development of emphysema due to an abundance of elastase, a tissue degrading enzyme.

The emphysematous phenotype is usually achieved through single or repeated intratracheal instillation of elastase (commonly 1 week apart), with porcine pancreatic elastase (PPE) often being the elastase of choice. Following instillation, the enzyme is shown to be cleared from the lungs in 24h, while the airspace enlargement induced continues for 10 to 21 days.

Functional assessment of PPE-induced emphysema is usually performed 21 days after elastase administration. While changes can be detected at earlier time points (D10), measurements at D21 (3 weeks post instillation) have been shown to provide a more consistent increases in lung compliance (the ability of the lungs to stretch). In the elastase mouse model of emphysema, these changes can be perpetuated for up to 6 months.

The elastase model of emphysema is a useful approach when looking for a simple exposure protocol with rapid and significant lung injury development. However, other models are required to better represent the phenotype of the human disease.

Cigarette-smoke (CS) exposure is the gold standard for COPD model development. In most cases, COPD is linked to CS exposure. As such, this model mimics human exposure more accurately, thus providing the highest relevance to the disease in humans. Further, COPD development in humans takes place over several years and elastase models do not replicate this slow progression.

CS exposure in animal is usually performed using one of two configurations, nose-only or whole-body exposure, with both resulting in emphysema. Systems used for this kind of exposure can usually be configured to deliver side-stream smoke, main-stream smoke or a mixture of both.

Although there are various examples of CS exposure protocols in the literature a chronic exposure (i.e. 5 days/week for up to six months), is often required for emphysema to develop.

Other Models of COPD

COPD is a heterogenous disease and recent GWAS studies have identified several genes that may contribute to disease initiation and/or progression. Genetic models are thus useful to investigate the role of particular genes for susceptibility to COPD development and pathogenesis.

Functional studies have evaluated the role of various genes in lung function, and disease development and progression. Some genes have been shown to alter susceptibility to environmental exposure-induced COPD, while others result in spontaneous COPD development.

Mice are currently the most widely used species to manipulate gene expression. Most studies use whole-body knockout animal models. There are two major approaches for targeted gene manipulation:

Chronic bronchitis is one of the two main phenotypes of COPD. Various studies have worked on developing animal models of chronic bronchitis. The induction is done by means of exposure to different noxious/toxic inhalants, most commonly:

Species and strains are important factors to consider when developing COPD animal models, as each will respond differently to injury induced by either elastase or CS exposure, with differences in lung development and maturation. Learn more here.